Create an Account - Increase your productivity, customize your experience, and engage in information you care about.

The Winona Fine Arts Commission (FAC) Grants Program has awarded eleven grants during this continued time of great need to local artists and arts organizations. The FAC place a call for submissions for $500 grants intended to assist creatives and arts organizations in continuing their practice and operations impacted by the coronavirus pandemic. After discussing each of the very strong submissions, the Commission is pleased to announce the following winners:

The FAC considered requests from individual artists and non-profit organizations in the Winona area whose work or creative practice has been impacted by the coronavirus pandemic. The following criteria were considered in selecting the winners:  Artistic merit, Financial need, Contributions to Winona, Sustainability of work if funded 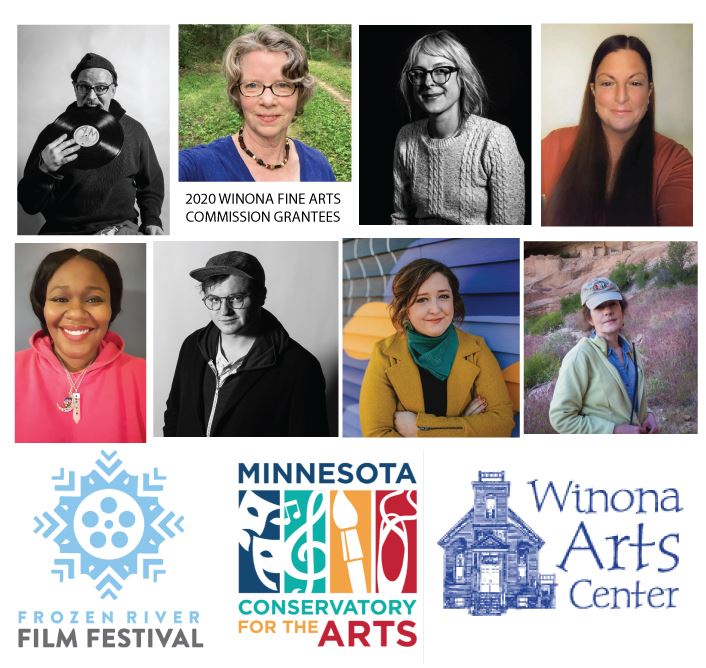 Here are brief bios of the awardees- organizations followed by individuals:

The Frozen River Film Festival (FRFF) offers programs that engage, educate and activate viewers to become involved in the world. These programs provide a unique perspective on environmental issues, sustainable communities, adventure travel and sports, and diverse cultures while showcasing the art of documentary film. Our films often explore issues, concerns, and life's successes that are usually not covered in the local media. We connect our viewers with people at the heart of current events, organizations at the forefront of social change, and distinct cultures in an increasingly global community. Part of the Winona community for over 15 years, this year FRFF will be offering its first virtual festival (February 10-14, 2021). For more information, visit frff.org.

Minnesota Conservatory for the Arts (MCA) is a community arts school and affiliate program of Saint Mary's University that exists to provide quality performance and arts education in music, theatre, dance, and visual arts by nurturing and encouraging artistic expression in children and adults.  MCA's mission is to make the arts accessible to all residents of the Winona area regardless of ability, age, race, gender, religious affiliation, or economic background.

The Winona Arts Center (WAC) ,was established in 1956 by seven Winona women and is one of the oldest established arts groups in the area. The WAC provides  a venue for creative performances, exhibits and educational experiences in the arts. The Center is housed in a former church built in 1864 which offers the Frances Prentiss Lucas Gallery, performance stage and screening area. The WAC Gallery offers opportunities for local artists to share their work with the community. Exhibits from local and regional artists are offered year-round, and include an exhibit of Center members' works. The Winona Film Society is housed in the Center and is the only venue to offer a selection of foreign and independent films. In 2014, The Winona Arts Center became home to the Riverbed Press. The Conrad etching press is available for experienced printmakers to use for a nominal fee. Printmaking classes along with other arts classes are offered for both children and adults for little or no cost. Each year it is estimated that 1,300 participate in the Winona Arts Center programs and events.

Dr. Robert Armstrong, entrepreneur and puppet master, has redefined entertainment. From his humble beginnings as a street performer in New Orleans to the grand stages of many mid west festivals, Dr. Bob has been spreading smiles across the nation. Performing original puppet theatre and sharing his talent for building puppets with the community Dr. Bob hopes to see your smiling faces again!

Mary Farrell's work is a combination of still photography and documentary film-making. Her work as a photographer leans towards" community photography," in that she capture the people, landscape, and culture of Winona and shares it through her work in the tourism office as well as her personal social media platforms. It was through her attendance at the Frozen River Film Festival, that she became interested in documentary film making and she has produced 3 films since 2017. She enjoys documenting both historical and current events in her community and has a desire to capture the people and events that have made a difference in the Winona community.

Brianna Haupt is an art educator for people from age three to ninety-three. Currently, she teaches at Riverway Learning Community and Minnesota Conservatory for the Arts where she reaches students through a variety of media, using Montessori influence and philosophy. This grant will allow her to pursue her personal practice in instant and film photography.

Patricia Howard grew up in Winona. She is fond of her community and she is enthusiastic about Winona history. She can often be found out capturing the natural beauty of Winona's wetlands through her photography. Expanding upon her skills as a portrait photographer, she has been a regular fixture at the Annual Great Dakota Gathering Homecoming and Powwow creating fine art photography. Patricia has also been showcasing cowboy culture by capturing local horsemanship competition photos. She is inspired to share images of the rich and enduring traditions of American Indians and the cowboy lifestyle and to contribute to Winona's cultural landscape in a meaningful way.

LaShara Takesh Morgan is known by many as Kiesha or Miss Kiesha. She is a mother of 4 and a long time resident of Winona Minnesota. She is originally from Chicago Illinois but have lived in Winona for 25+ years. She went to high school here in Winona for the first 3 years but graduated from Redwing High school in Redwing MN. She is the founder of Our Voices, which is a group that she started 4 years ago for Black and Brown students in the WAPS district and other surrounding areas. It was started to give these students a safe space to come together with one another and be themselves without being judged for being who they are. The members of Our Voices see it as being very therapeutic and they look forward to their weekly group sessions, where they can come and exhale all of their worries.

Nathaniel Nelson is a filmmaker, photographer and curator based out of Winona, Minnesota. Since graduating from Winona State University in 2017 with a major in Film Studies, he has focused on collaborating with members of the Minnesota music and arts community through his studio, Treedome. Through film and photography, particularly music-based works, his style incorporates hazy, dreamlike imagery and storytelling, and has produced more than 150 works throughout the Midwest.

Maggie Panetta is a graphic designer and muralist working in Southeastern Minnesota. Since studying studio art at Macalester College (St. Paul, Minn.) she's collaborated with Visit Winona, Rethos: Places Reimagined, the Winona Area Chamber of Commerce, and more. Through a bright, illustrative style, her mural work is a modern take on public art that will continue to move the region's landscape forward.

Anna VanDermark was trained as a classical painter at Atelier Lack, a private fine arts college that replicates the European Old Masters model of study. Over the years, Anna has used this intensive training to explore a variety of mediums - oil painting, pastels, ceramics, textiles, beadwork, and photography. Along the way, she has received numerous regional and national awards for her art expressions.

Previously, The Fine Arts Commission (FAC) awarded grants to create art about or inspired by our fair city. All creative, visual, or performing artists who are Winona residents (or are enrolled as a full-time student at a Winona institution) were invited to apply for grants up to $1,000. Resulting artworks or creative projects will be installed or performed in a municipal space in Winona.

The application process has ended for this round of grants.

Applications will be reviewed by the FAC. Those requests selected for funding will be recommended to City Council at the next regularly scheduled meeting. City Council members make the final decision regarding the allocation of FAC funds. Projects must be completed within 12 months of the date of the grant award.

The following does not apply for the current special grant program

Grant recipients must use funding provided for the specific purpose of the original stated intent. Any major change in an approved project must be communicated to the FAC for approval in advance of making that change.

The City of Winona will require a signed memo of understanding once the FAC recommends funding. The signed memo of understanding must be completed prior to the application being forwarded on to City Council. All recipients of FAC funds will be required to submit invoices monthly to the City of Winona in order to spend FAC funds.  It should be noted that the turnaround for reimbursement is typically two to three weeks.

All projects that receive FAC funds must acknowledge the support of the FAC in all materials distributed about the project (fliers, posters, mailings, etc.), all publicity (press releases, radio announcements, ads, etc.) and at the event, if appropriate.

A final detailed financial and narrative report, including copies of publicity materials, must be presented at a regularly scheduled FAC Commission meeting within two months after the event is held. Any residual funds and/or funds raised on behalf of the FAC are payable to the Commission when the report is made.